The first thing I want to mention is that I did compare your Canadian leafcutter bees to some leafcutter bees purchased in the United States. I incubated both sets of bees under the same indoor conditions where the leafcutter cocoons were placed in plastic petri dishes with a plastic lid that holes drilled in it for air circulation. I also had an internal temperature probe in each dish to monitor the temperature, and both temperature and humidity were recorded on a daily basis to an Excel spreadsheet. I also took notes and put them on the spreadsheet as I examined a few cocoons over the incubation period. 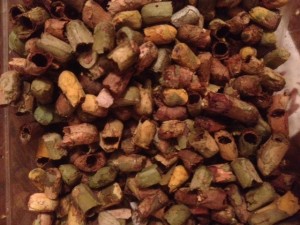 The other thing that I found, which I would do different next time, is that the required temperature of 86oF (30C) for the bees to emerge by 28 days is probably very critical. When I received both your bees and the U.S. bees at the end of May, I decided to try and incubate them inside my house where the temperature is more constant. During May and June in the Portland area we still have wild swings in temperature where it can be 64oF (17.7C) for many days or weeks in May and June.

With the indoor incubation I was only able to maintain an average daily temperature of 76F (24.4C) as compared to the needed 86oF (30C), which resulted in the bees only beginning to emerge (the males) at 30-32 days instead of the standard 18-20 days. Fortunately when the first males began to emerge I put them all outside and our daily temperatures were then in the 80-85F (26-29C) range. Again, despite the longer incubation time I still had nearly all the Canadian bees emerge as compared to only about half of the U.S. bees emerge over this same time period.

The retention of the leafcutter bees was a surprise to me in that only 5% of the Canadian and none of the U.S. leafcutter bees decided to take up residence in my nesting box area.

Where I put the bees for release was actually within the middle portion of my Mason bee nesting structure (that faces East), and it contained many empty round tubes with and without papers liners, two of your corn stacked-systems, and many of the natural reeds at various sizes.

Also, on the other side of my nesting box are rose bushes, a big lilac tree, azaleas, a redbud tree, and many other plants that leafcutter bees are supposed to like for nesting material. We also have a very large Wisteria plant that actually hangs near my mason bee nesting area, and I could find many of the leafcutter bees on the Wisteria flowers as well as on other flowers all around my house. However, despite being in close proximity to my nesting box on the flowers that very few bees decided to take up residence. Wherever the bees decided to go I hope they survive the winter and come back next spring.

I am curious though what you or others have done to have good retention of leafcutter bees?

Anyway, it was very fun to have them as summer bees, and I definitely would order more leafcutter bees from you next spring and try a few different things. I have also taken a lot of video of the leafcutter bees on our flowers, and when I have time I plan to process the video to extract some still photos to send to you.

Thank you Michael for sharing your findings.  The Abstract from the scientific article is given below.  Dr. Margriet

J. Econ. Entomol. 98(6): 1785Ð1790 (2005)
ABSTRACT Samples of overwintering alfalfa leafcutting bee, Megachile rotundata (F.) (Hymenoptera:  Megachilidae), cells were sent to the laboratory as loose cells or in nesting boards from bee
managers in the United States and in Canada. X-radiographs of cells were used for determining cell
contents. Cells containing live prepupae were incubated, and the sex of emerging adults was recorded
daily. Cells from which no adult emerged were dissected to determine the developmental stage of dead
bees and sex of dead pupae or adults. Bee cells incubated in commercial settings and placed in alfalfa
fields by the same bee managers described above also were evaluated to determine adult emergence
success. The proportion of live bees in wood nesting boards from the United States was much lower
than the live proportion in polystyrene nesting boards from Canada and loose cells overwintered in
the United States. For laboratory-incubated loose cells, survival and sex ratios of bees from Canadian
sources were statistically higher than those of U.S. bees, but the onset and duration of emergence times
were similar. Fewer bees survived in the commercial setting than in the laboratory. Prepupal mortality
was signicantly higher than pupal or adult mortality, but there was no significant difference between
the sexes in the likelihood of survival during incubation. This study supports the commonly held belief
that alfalfa leafcutting bees raised in Canada and then sold to the United States represent a more viable
source of bees than most bees produced in the United States.