Bees in the prairies

In 2005, we travelled across Canada for a holiday. While we were travelling through Saskatchewan, I saw these strange structures in alfalfa fields.  I guessed that these structures could be housing alfalfa leaf cutter bees used to pollinate alfalfa for seed production.  A few years prior to this, I had seen wooden sheds, crates and empty buses used to house alfalf leaf cutter bee nests.  We looked inside and saw that it did house leaf cutter bee nests.  However, even though there were quite a few small vent holes and an open door, it was very hot inside.  This yurt was molded and made of plastic.

﻿﻿ Colourful yurts made of tarp material were also seen.  The roof was made out of translucent white tarp and the wall was either made of white, orange or blue tarp.
﻿ 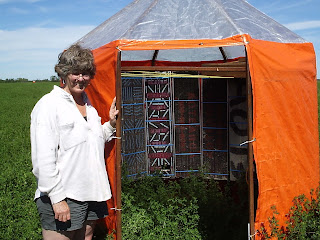 When we stepped inside, the temperature was probably around 25C.  Not too hot and just right for alfalfa leaf cutter bees.  Alfalfa leaf cutter bees need at least 20C.  I thought that this yurt design was much better than the molded yurt.  The temperature inside the yurt was just right for these bees. The only difference that I could see between the tarp yurt and the molded plastic yurt was the larger roof hole in the tarp yurt.

…More on this design next time.