Frank M. from Victoria, BC sends photos and writes about his mason bee “harvesting group”

I’m writing to tell you briefly about our 2010 harvest, and also am sending some images of weird and wonderful things that we encountered in the process.
As for the harvest itself, I’m not going to send you all the data but will simply summarize.
I had 13 people in the group this year.  Altogether we set out 3110 cocoons, and  we harvested 3124.  Not a banner year by any means, but at least sustainable.
Here are some photos.  I’d be pleased to receive any comments or suggestions about these, Margriet.  It seems that every year we find something more weird and more wonderful than ever.
I should also mention that I’m using the stainless-steel-screen technique to remove additional mites after washing.  I did it the first time an hour or so after washing and drying, with very good results, I’ll do it again this month while they’re in storage, and a final time when I take them out of storage to distribute to the members of our group..
This photo (below) is of a group of 15 strange rusty coloured cocoons that we found in just one tray from a nesting box on Galiano Island. They seem to be covered with sticky pollen or something that stains the fingers.  Image 009 shows how the cocoon material itself is sort of layered.  When I tried to open some of them I found that there was an outer layer that peeled away, with some sort of cocoon-like structure underneath.  Inside that I found only a thick creamy coloured fluid that oozed out.  Any ideas?
COMMENTS:  This is a species of summer mason bees, that uses masticated leaf materials for its chamber construction.  I have never opened one, so it is interesting to note that the content is still in the pupal stage of development.  The final stage of development would occur when warmer weather begins in spring. 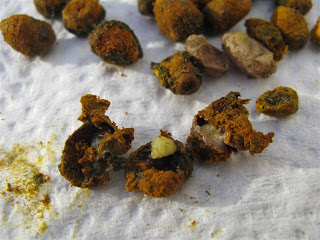 This photo (below) shows a gallery with eight compartments constructed from pine resin, for goodness sakes!!.  Four of them have tiny caterpillars in them.  They look superficially like the ones in Image 002 but they are much smaller.  There is no doubt about the pine resin (or some conifer), because it was sticky to remove and as I worked it I could smell the familiar fragrance.  Again, any ideas?
COMMENTS:  This looks likes some resin bees in the pupal stages of development.  They would develop into an adult resin bees and emerge in the summer when the resin is soft. 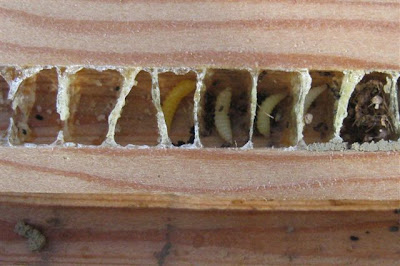 This photo (below) shows wiry brown frass completely filling a compartment.  There were two or three of these compartments. The entomologists at the Museum thought it might be fly frass.  Never seen it before.
COMMENTS:  Does anyone have any ideas on this one? 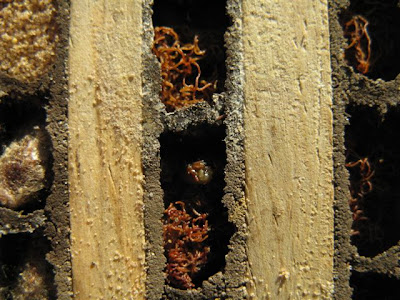 The photo below shows how easily the mites can travel from one gallery to another.
COMMENTS: The brown-reddish granules are the pollen feeding mites.  One or two or more land in the chamber in spring and mites consume the pollen.  What you get is a million mites and no bee. 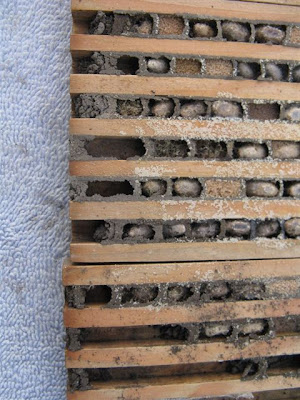 This photo (below) shows another type of caterpillar.
COMMENT:  It could be a beneficial wasp pupae. 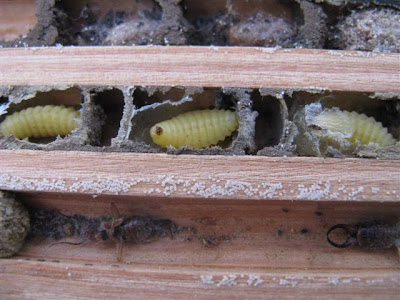 This shows (below) a cocoon completely covered with dark brown rods of frass.  The question is .. whose frass is it and how could it have been placed while the cocoon was completely enclosed by mud and the overlying tray??  I’ve cropped the image so you can see it better.
COMMENTS:  When a mason bee spins its cocoon, it leaves its frass on the outside of the cocoon.  The different colours of pollen indicates that multiple species of plants were visited when collecting the pollen. 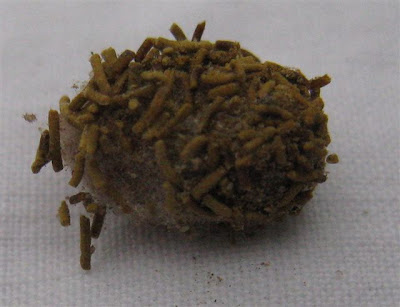 This photo (below) shows large creamy coloured ‘caterpillars’.
COMMENTS:  This compartment contains no bee, although it is the compartment made by a mason bee.  These grubs were laid in the compartment while the female mason bee was completing the construction of the compartment.  The brown stringy frass may belong to this insect. 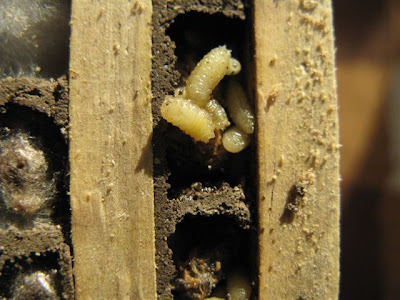 NOTE:  Usually I would not disturb the cocoons and the pupae like the resin bees, but close up the nest and set the nest outside.  The reddish frass and the multiple pupae in one cell, looks like it came from a predator of some kind and I would remove it from the nesting tunnels.

4 replies on “Frank M. from Victoria, BC sends photos and writes about his mason bee “harvesting group”“